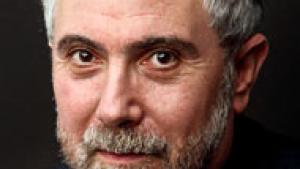 The paychecks of the wizards of Wall Street were appropriate, we were told, because of the wonderful things they did. Somehow, however, that wonderfulness failed to trickle down to the rest of the nation — and that was true even before the crisis. Median family income, adjusted for inflation, grew only about a fifth as much between 1980 and 2007 as it did in the generation following World War II, even though the postwar economy was marked both by strict financial regulation and by much higher tax rates on the wealthy than anything currently under political discussion.

Then came the crisis, which proved that all those claims about how modern finance had reduced risk and made the system more stable were utter nonsense. Government bailouts were all that saved us from a financial meltdown as bad as or worse than the one that caused the Great Depression.

And what about the current situation? Wall Street pay has rebounded even as ordinary workers continue to suffer from high unemployment and falling real wages. Yet it’s harder than ever to see what, if anything, financiers are doing to earn that money.

Why, then, does Wall Street expect anyone to take its whining seriously?

I mine øjne ønsker han kun at få OWS til at stemme på demokraterne næste år.